Heating up in the High Arctic 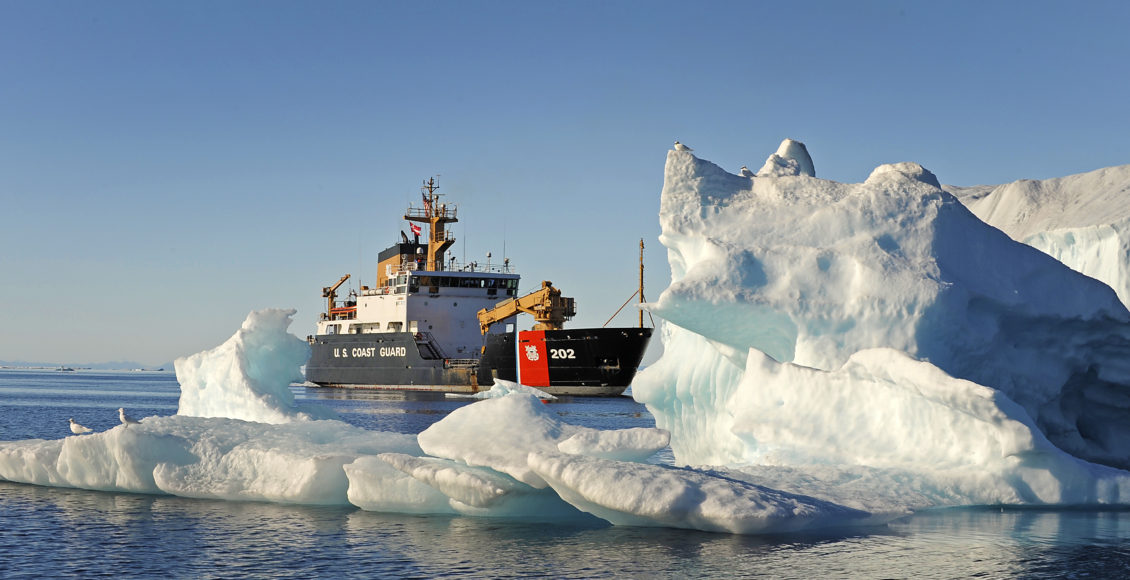 This article is part of a series on climate conflict. To read the previous article, click here.

The idea of global warming physically manifested itself most clearly in the melting ice caps. Series of satellite images can quantitatively determine that polar ice is receding at an alarming rate. Most often the narrative goes towards saving polar bears and seals, but rarely do people’s minds jump to the thought of warships steaming through the iceless ocean.

States and various actors within them have been altering their view of climate change rather drastically. Some U.S presidential candidates and state agencies are admitting the many risks that it poses to national security, with American military bases reporting increased climatic events hampering operations. The Green Party of Canada has also acknowledged the threat to Canada’s north. With that in mind, the Arctic seems like the next front between the world’s great powers.

With melting ice caps, the Arctic becomes far more accessible for public and private entities. Scientists estimate that the Arctic’s undiscovered reserves potentially hold 90 billion barrels of oil and 1699 trillion cubic feet of natural gas. The Arctic will also become more navigable for trade ships, cutting days off trips. Northern communities will become more susceptible to disasters because of rising sea levels and melting permafrost. All these variables are compounded by the fact that gasses trapped in ice and permafrost will greatly accelerate warming, with higher latitudes in countries like Canada are warming up faster than other areas.

As the north continues to open up, nations are already circling around a dying arctic. Most recently at the Arctic Circle Assembly, China emphasized its desire for a “Polar Silk Road”, in reference to its landmark Belt and Road Initiative to increase Chinese market and political influence on the world. China’s stated role in the arctic is that they “will not interfere” but that they will “not be absent”. They have also declared themselves a “Near Arctic State” and acquired observer status on the Arctic Council hoping to gain a seat at future arctic negotiations once the scramble begins. China’s ambitions in the arctic are not without reason. As its economy continues to grow, it will need to access the Arctic’s vast untapped energy resources and to invest in the infrastructure to channel those resources back to the Chinese mainland. China has also expressed plans to expand the Belt and Road Initiative to the northwest, encouraging infrastructure investment in Canada by Chinese firms (at least until the Huawei incident).

But China’s ambitions are more than just economic. The vast wealth of the arctic sits just within reach of its American rival. China would likely be seeking a foothold in the arctic for the sake of counterbalancing against the US and its NATO Allies. Historically, the US has had little ambition in the arctic, limiting itself to arctic maritime boundary and navigation disputes with Canada. However, despite the current U.S administration’s policy of climate denialism, they are becoming increasingly aware of the situation to their north.

Secretary of State Mike Pompeo admitted the potential dangers of this new frontier and warned against taking “provocative actions” at the most recent Arctic Council meeting. Yet, he reversed course almost immediately, arguing that Canada’s claim to the Northwest Passage was “illegitimate”, as well as admitting that the U.S itself was exploring naval operations in the area. While the arctic resources have yet to become available for exploitation, the Northwest Passage is quickly becoming the first point of conflict of the melting arctic.

The Passage has been sought after ever since the arrival of Europeans in the continent as a potential sea route to Asia north of the Americas. Throughout the colonial period, various expeditions were launched in search of a route to the Pacific, with many ending in disaster. The lengths that mariners have gone through demonstrates the potential lucrativeness of this route. But for centuries, such a route was impossible due to the constant hazard of ice in the Canadian arctic.

Now that iceless summers are becoming more frequent, interested nations are already legally and physically testing the Northwest passage and the potential Northeast passage north of Russia. Canada continues to demand that foreign vessels request permission to cross the passage, considering it to be internal waters that are regulated by its federal government. However, The U.S refuses to notify Canada, claiming the passage to be an international strait like the Bosporus.

Such a claim would imply that any nation has the right to send a merchant ship – as well as military ships with some restrictions – through the passage without respecting the sovereignty of the waters.

If the U.S or other prospective states were to press such a claim militarily or with civilian ships, Canada must invest in infrastructure in the north to accommodate and protect vessels as they traverse the route. Canada would have to increase naval and coast guard activity to keep the route clear and to keep the peace. This would require deep water ports with access to resources for replenishment and possible repair, investments placed on taxpayers shoulders

The free use of the northern routes can also harm local ecosystems without allocating any income towards mitigating environmental degradation. Most importantly, however, the enforcement of the claim would allow foreign military ships free reign to roam a potentially resource rich territory.

The stakes of this region are only getting higher. Russia has been rebuilding Soviet-era bases in the Arctic, launching “Weaponized Icebreakers” and ramping up arctic warfare training exercises. In response, Scandinavian countries have requested that NATO steps up its Arctic activity. In October 2018, Norway hosted NATO’s largest military exercise since the cold war era in operation “Trident Juncture”.

Canada, among others, are building up their Arctic naval capabilities. On top of their new line of frigates, Canada hopes to build eight Arctic and Offshore Patrol Ships (AOPS) for its navy and coast guard. They are also joined by Norway and the US in expanding their Ice Capable fleet, however their efforts pale in comparison compared to Russia’s 61 ice–ready ships.

The effectiveness of such exercises and military buildups are further challenged by increasing divisions within the NATO alliance. Most recently, Turkey’s position within the alliance has been questioned, and French president Emanuel Macron claimed that the alliance was “brain dead”. Such a diagnosis might prove damning for the alliance when combined with President Trump’s views on the alliance and his possible withdrawal entirely.

NATO has been slow to respond to the growing interest in the arctic compared to its rivals. While China and Russia have prioritized much of their resources in building their claim on the Arctic, the NATO allies have yet to show a unified pivot towards the north. Instead, they have argued amongst themselves on issues of transit rights, as Arctic diplomatic forums, resources, trade routes, and all the infrastructure behind them become dominated by their rivals. And without any apparent cohesive response on climate change on the horizon, it seems that the power vacuum in the arctic will keep on growing till a scramble ensues.