Pence’s Serenity vs. Kaine’s Aggression: Who Came Out on Top? 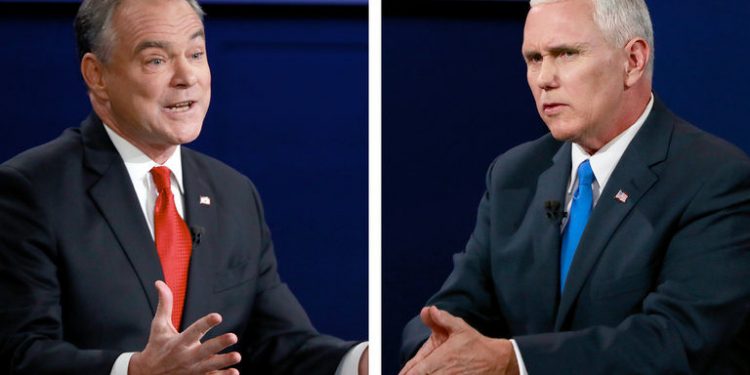 After a very fluctuating debate complete with myriad interruptions, it was evident that this battle for the vice presidency was nothing less than a verbal boxing match with Time Kaine on the offensive and Mike Pence on the defensive. They say the best offense is a great defense with Pence coming out swinging. Although Pence won the round, Kaine won the aftermath.

Everyone who watched the first presidential debate was expecting the same thing following into this one; Tim Kaine on the attack with as many Trump quotes he can get his hands on. Although Kaine did not fall short of this expectation, Mike Pence surprisingly handled this aggression calmly to the point where Kaine looked inept, abrasive and just plain desperate. The cool, calm, and collected demeanor of Pence countered what seemed to be an indefensible barrage of controversial statements made by Mr. Trump under different topics. In fact Tim Kaine interrupted Mike Pence a whopping 72 times throughout the debate. A prime example of this arose from the Donald Trump tax return issue. Although Kaine was trying to explain his running’s mate reasoning behind not releasing his tax returns, Kaine insisted Pence to get right to the point by constantly reiterating that “[Trump] said he would release his tax returns.”

Pence was smart when handling these remarks from Kaine. He didn’t do it under his running mate’s position but rather on his own. For instance, when under the debate of Russian relations, Kaine was quick to mention Trump’s praise of Putin being a “strong leader”. A crafty Pence instead contrasted the Russian leadership to that of America’s by stating that “the small and bullying leader of Russia has been stronger on the world stage than [America’s] administration.” This not only embraced the Republican conservatism take on Russia but also managed to include a skewed version of Trump’s views on Putin himself.

Another area in which Pence managed to win under an unfavourable question, the personal abortion issue. Being of catholic faith, Pence’s views aligned with that of his running mate’s in how abortion should not be legal. Kaine pointed out the statement of Pence’s running mate on how “abortion should be punished,” in which Pence shutdown by simply replying “[Trump] is not a polished politician.” Both Kaine and Pence are strong supporters of the catholic faith but Kaine is not a big fan of the death penalty or laws against abortion. Although he is for abortion rights, he once stated that “he supports the Hyde Amendment,” which legally stops funding for abortion clinics in america. This stirred major controversy within the debate because the Clinton campaign is against this Amendment. On Pence’s side, backed by his religious beliefs, he was completely against abortion but had to explain his running mate’s controversial quotes on the topic. This was an argument muddled with moral beliefs as well as religious faiths. However, because of how easily and calmly Pence was able to handle his side of the equation, he came out on top.

Even when it came to the tax return dilemma that was Kaine brought up time and time again, Mike Pence took the simple approach by calmly reiterating that “[Trump] will release his tax returns once the audit is over.” Having Pence dodge and maneuver his way onto a more comfortable ground without creating more publicity towards that issue was well played on the Pence side considering how controversial it is.

Now let’s face it, the facts are facts. Pence is on the defensive with Kaine having many controversial Trump quotes to interrogate him with, so on paper Tim Kaine should be winning. Oddly enough, that is just not the case for how often Kaine forced these quotes in conversation. He interrupted Pence on many subjects, not to mention the moderator, Elaine Quijado, which only hurts him on an overall scale.

An example of this is going back to the abortion dispute in which Kaine called out Pence’s running mate for wanting to have “some form of punishment” for abortion. A few moments into this quarrel and Kaine tries to squeeze in Trump’s views on Mexicans in which Pence showcases his opponent’s desperateness by stating the iconic line; “you whipped out that Mexican thing again.” This not only gave a path for Pence to stop talking about the abortion dilema for a few moments but it showcased Pence’s calm style and tone to Kaine’s aggression and impatience.

This is purely why Kaine lost the round. He created his own Achilles heel and showed about 37.2 million people why Pence was the more professional potential vice president. However, that is just 37.2 million people which, although a large number, is lower than the past two vice presidential debates. The Joe Biden with Paul Ryan debate had 51.4 million, and the Joe Biden with Sarah Palin debate had 69.9 million viewers. Pence won the round by having an edge in style and performance in front of a smaller audience but Kaine showed that he won the fight in the long run by having Pence react to the stream of indefensible quotes said by his running mate.

There is no way Pence can logically explain half the things his running mate has said in the past without shooting the Republican side in the foot. If he tried to, he would’ve easily lost the round. The only thing Pence could do however was either straight up refuse to acknowledge the fact that his running mate did say those things to soften the blow on stage or frame those quotes in a way that allows himself leeway from fulling explaining himself. Style points can attract the very undecided voter but that can only work for so many people. As a former radio talk show host, Mike Pence knows how to communicate his ideals well amongst a wide range of people, but communicating the ideals of his running mate might have to take a few more years behind the mic.

Kaine was in a win-win situation since the very beginning. Although he took a bullet regarding his own public reputation in front the 37.2 million who watched, his sole mission in this vice presidential debate was to have on record that even Trump’s own running mate, was unable to defend the things Trump has said in the past. When it came to many elections in the past, Vice Presidential debates rarely affected final poll numbers in the overall election. This is why Tim Kaine wasn’t afraid to put himself forward for the sake of his running mate, Hilary Clinton, and with all the drama and commotion buzzing around those topics, how could he not? Pence did the best he could. At the very least he contrasted his running mate’s contentious attitude with his organized and professional demeanor and that’s a win for the Republic side considering what the campaign has shown in the past few months. Even though Mike Pence floated like a butterfly throughout the entirety of the dispute, Tim Kaine stung like a bee in the aftermath and it will show results.