On the Frontier Once More: The “Vancouver Model” of Decriminalization 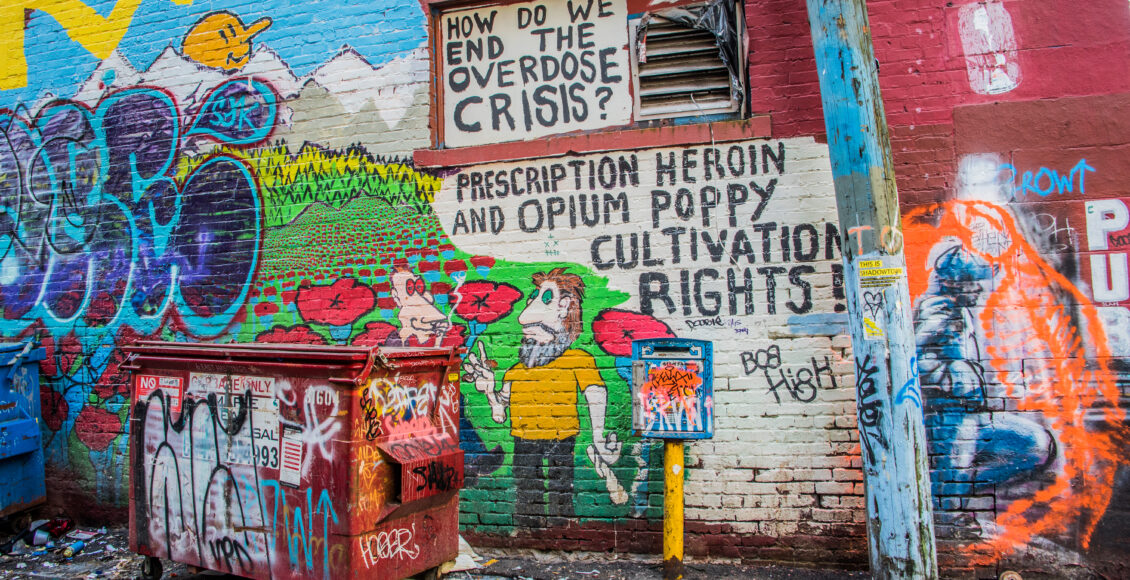 In the wake of a record-breaking year for drug overdose deaths, the city of Vancouver formally submitted its proposal for the decriminalization of illicit drug possession to Health Canada on May 28, 2021. A step that has been long considered but never realized, drug decriminalization received public support from high levels of law enforcement and government in the past year, establishing a political climate more conducive to its enactment. Vancouver’s decriminalization intentions have likewise garnered support from a wide range of other actors, including civil society organizations, local Indigenous groups, and other mayors from around the province. If accepted, Vancouver’s proposal would render it impossible to charge individuals caught with drugs below specified levels criminally and instead “promot[e] access to life-saving health services.” It aims to improve drug users’ health outcomes by reducing their stigmatization and marginalization, which should encourage addicts to seek treatment. However, as the specific details of the “Vancouver model” emerged, activists and stakeholders did not hesitate to voice their concerns to the city. While existing drug policy has clearly failed to prevent or resolve the ongoing crisis, a flawed decriminalization plan may inadvertently exacerbate the current situation and become a bungle that ultimately sets back the endeavour for more liberal, progressive policy. Accordingly, it is essential to evaluate the potential problems within the “Vancouver model” and ensure that the current proposal is sufficiently comprehensive.

A primary concern raised by critics has been the disproportionate influence of the Vancouver police department (VPD) relative to other stakeholders and actors throughout the drafting process of the “Vancouver model.” Some have taken this issue further and asserted that the police should not influence the city’s decriminalization plans at all. Law enforcement would undoubtedly retain a significant role in decriminalization, and Health Canada required police involvement in the drafting process regardless. However, Canada’s history of policing users and addicts is cause enough to be concerned about the VPD’s role in formulating the city’s decriminalization plan. Furthermore, those who would be most impacted by the new policy, namely drug users, were inadequately consulted about the most significant components of the proposal. In a similar manner, Vancouver made a deliberate decision to exclude minors from its decriminalization proposal, even though youth users have been just as afflicted by the current drug crisis. According to the city, this decision was made because it remains a supporter of existing criminal justice legislation that “aims to avoid criminalizing youth and focuses rather on rehabilitation and reintegration.” However, as British Columbia grapples with legislation regarding the involuntary institutionalization of youth addicts, excluding the youth voice from decriminalization discussions leaves an already vulnerable population at the mercy of institutions that have consistently harmed and harassed them. Though there may be some evidence to give the VPD the benefit of the doubt, failing to consult the groups most directly affected by the new policy may produce knowledge gaps that fundamentally hinder the efficacy of decriminalization. Moreover, given the overrepresentation of Indigenous Peoples among addicts, this may also reflect a historical trend of imposing government policy on Indigenous Peoples without real, substantive consultation. But despite the city’s acknowledgement of these issues, it has nonetheless pushed through with its existing decriminalization plan without any substantive attempts to involve the discontented groups.

The “Vancouver model” has likewise been criticized by various groups. Users, activists, and researchers maintain that the city’s thresholds for what amounts of drugs constitute “personal use” do not reflect the current context and are far below what an average user has on any given day. Accordingly, they have raised concerns that the current thresholds are rooted in outdated data, may promote the development of more dangerous, potent drug mixes, and would force users to participate in the illicit drug market more often. Mayor Kennedy Stewart has stated that current levels are only “a starting point” and implied that they are dynamic and subject to change. Still, raising thresholds in the future could potentially emerge as a significant political challenge and ultimately hinder the overall effectiveness of decriminalization. That said, it is worth noting that the thresholds of Portugal’s heralded drug policy are even lower than the levels proposed by Vancouver.

Moreover, like the Portuguese model, the “Vancouver model” would afford law enforcement discretion in charging individuals caught with amounts higher than the thresholds. Although this element has not emerged as a significant issue in Portugal, Vancouver activists remain apprehensive about entrusting police with these judgments and allege that addicts remain over-policed. Still, arrests by the VPD for simple drug possession have consistently decreased in recent years and, relative to other BC police forces, Vancouver police have demonstrated more restraint in applying this charge. While individual officers may retain prohibitionist views, the department as an institution has rhetorically supported decriminalization and drug policies that avoid charging users for possession. Nonetheless, until the entire department is brought into line, the mistrust will persist and undermine the city’s decriminalization efforts.

Beyond the issues raised by activists and critics, the funding details and treatment options outlined in Vancouver’s decriminalization plans leave a lot to be desired. As recognized by Dr. João Goulão, the architect of Portugal’s current drug policy, decriminalization is not a panacea. It requires an extensive underlying treatment infrastructure, the sustainability of which can be precarious without dedicated funding. While detailed funding plans may be an unreasonable expectation at this stage, the city’s treatment options lack variety and inadequately address the root causes of problematic drug use, despite aiming to reduce barriers and obstacles to treatment. By and large, the discussed treatment options are harm-reductive policies that are meant to combat the existing toxic supply of drugs. Although this is undoubtedly essential in reducing deaths, it is evident that addressing the current addiction crisis requires more than simply addressing drug use on a pharmacological level. The “Vancouver model” must invest heavily in other, less traditional means of treatment, such as wage subsidies and therapeutic psychological support, that address the environmental elements of addiction and enable addicts to participate and root themselves in society. Accordingly, efforts such as the city’s partnership with Embers Eastside Works, which seeks to provide employment opportunities to those living on the Downtown Eastside, must be afforded greater funding and resources. However, Vancouver’s proposal mentions such programs only in passing, which, in turn, leaves significant doubt regarding whether the city will seek to expand its treatment options to become more eclectic and diverse. While these programs would inevitably require funding beyond the city’s budget, from the provincial and federal governments, for instance, it is discouraging that the proposed “Vancouver model” only scratches the surface in pushing for their implementation and expansion.

The “Vancouver model” is evidently imperfect and unpolished. While Mayor Stewart suggests that there is only a narrow political opening to pass decriminalization legislation, poor implementation and planning may unwittingly aggravate the status quo and become a calling card for those seeking a return to prohibitionist policies. While this latter concern may be excessively pessimistic, a significant minority of Canadians maintain support for more punitive drug policies. Consequently, the concerns surrounding the “Vancouver model” of decriminalization must be addressed and rectified. As it has been in the past, Vancouver is at the forefront of liberal, progressive drug policy and has an opportunity to transform how we approach drug use and addiction treatment. However, in order to emerge as a catalyst for new drug policy across the country, it is essential that Vancouver’s decriminalization plans involve all stakeholders, reflect the current circumstances, and include a more diverse and eclectic treatment infrastructure that addresses the root causes of addiction.