What Would The Federalists Have Said About COVID-19?

Were the Federalists right to be skeptical of a bill of rights? 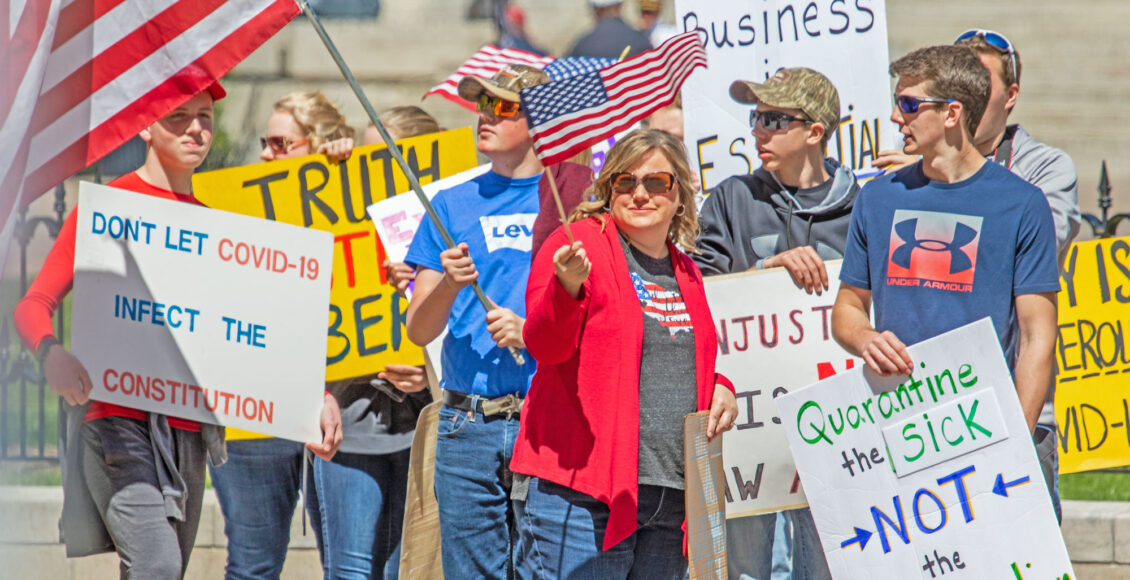 Many Americans revere the US Constitution like it is Scripture. Particularly in conservative circles, it is regarded as a nearly infallible document that is the basis of American ideology and tradition. Above all, the Bill of Rights — a set of ten guarantees protecting freedom of speech, religion, and the right to bear arms — is encased in a protective shield of revolutionary tradition and legitimate political importance. Yet few realize that many Founders, known as the Federalists, were opposed to the idea of a bill of rights, and believed that its oversimplified nature would create endless legal debacles. Such a constitutional crisis may have been realized as states confronted the COVID-19 pandemic in March, as the limits of “inalienable rights” became pressingly apparent, and jurisdictions imposed lockdowns and mask ordinances — necessary measures, in the opinion of most medical professionals. In response, some Americans mounted lawsuits, remonstrating alleged encroachments on their constitutional rights. Unsurprisingly, these legal challenges have frustrated the national effort to curb the spread of the virus. The Federalists might as well have said, “I told you so.”

Obviously, the Federalists did not predict COVID-19, but they did foresee some of the legal arguments that have occurred in its wake.

Backtrack to 1791: after the Revolutionary War, the Articles of Confederation and Perpetual Union had proved inadequate, and state representatives set about organizing a new government. The new Constitution delegated more authority to the central government, a radical transformation that was forcefully resisted by some Americans, the Anti-Federalists. From 1787 to 1788, the Constitution’s proponents, the Federalists, struggled to convert them.

Drawing on Enlightenment influences such as John Locke, the Anti-federalists reasoned that, although people yield some rights for the common good when societies are originally established, they retain certain inalienable rights that can never be surrendered. A bill of rights was necessary to make this explicit. Of course, the colonists were already accustomed to living under the 1689 English Bill of Rights and the 1215 Magna Carta. In fact, some colonies had issued bills of rights when the Revolution broke out. In this context, a bill of rights was hardly a radical proposition; however, the Federalists raised several important counterarguments before eventually agreeing to write one.

In the Federalist view, England only needed a bill of rights because its political system was composed of a hierarchy, with the monarchy reserving unmatched authority. The King was sovereign ruler of England, and in theory, could exert his authority over any area of life. The US, however, was going to be different. The people would be sovereign, and in such a society, certain rights are self-evident and cannot be limited by the legislature unless the authority to limit them is granted by law. It followed that issuing any act stating that the legislature cannot regulate a certain area of life — be it speech, religion, or the right to bear arms — would imply that it had the authority to do so in the first place.

By this reasoning, then, issuing the Bill of Rights in some ways actually constructed an even stronger central government than the one the Federalists were originally proposing because it effectively gave the federal government moral authority that transcended state jurisdictions. In fact, the entire principle of federalism rested on reserving certain moral authorities (such as those set forth in the ultimate Bill of Rights) to the states, while the national government would only be able to control them if the majority of state representatives voted to give it the power to regulate them. States would be able to regulate even personal and private matters, but under the national Constitution, the people or the states would retain all rights and powers that were not positively given to the federal government. In this way, the federal government’s powers would be strictly restricted to the general interests of the nation.

Had this system prevailed, a crisis like COVID-19 might have provoked a more direct response, as the national legislature might have been empowered to issue a penetrating, intense pandemic response protocol. Of course, one can only speculate about a hypothetical system of government. Still, the Federalists would probably have seen COVID-19 as a national crisis to be dealt with most efficiently by the national legislature, rather than as a local moral crisis to be deliberated by local jurisdictions. However, with the imposition of a bill of rights, it is not just a “moral” question, because the particular merits of the situation are less important than what is dictated by the text itself.

And that presents another Federalist counterargument: that a bill of rights would not only be unnecessary but also potentially dangerous. On the one hand, as Alexander Hamilton argued in Federalist 84, any listing of rights might be interpreted as exhaustive, suggesting that any rights that were not listed would not be retained. On the other hand, James Madison wrote that it might mislead people into putting too much faith in what history had demonstrated to be little more than paper protections, useless when they were most needed. They reasoned that a bill of rights might create a false sense of security; an illusory Great Wall that would in fact represent little more than a rhetorical picket fence.

Something like that has happened. Not only do Americans put too much faith in the Bill of Rights, but they also use its far-ranging protections to inhibit the promotion of the general welfare. For instance, take Evangelicals insinuating that the First Amendment protects their right to discriminate, or even to impose their religious prerogatives on others. Freedom of religion could have been protected by the legislature under the original Federalist system without the definitive language of the First Amendment; it is only so absolute because it is a corollary of Lockean political philosophy, in which such protections are declared inalienable because they are viewed as natural, God-given rights.

A United States without the Bill of Rights is difficult to imagine, but it would likely have responded more effectively to certain national crises, particularly pandemics. Quarantine ordinances have been challenged in court throughout US history — notably during the 1918 Influenza pandemic, and today amid COVID-19. Although most of these suits were unsuccessful, even the existence of those legal challenges is politically inexpedient, and they have complicated response efforts. Further, according to some researchers, in the US, quarantine orders are not legally enforceable enough to be effective at combating pandemics such as COVID-19. To remedy that deficit in enforceability, they argue that governments must invent “new legal tools.”

One solution may be a limitation clause. Canada’s Canadian Charter of Rights and Freedoms (CCRF) has one. Freedom of speech, religion, and other liberties are guaranteed — “within reasonable limits.” As a result, in the case of a quarantine ordinance, the legal question is whether or not it constitutes a reasonable limitation of those rights. It does not raise the essentialist question of whether or not such rights can be infringed at all, because the framers of the CCRF understood that no rights are truly inalienable, and that a constitution must be able to adapt to the imperatives of certain urgent circumstances.

Of course, the US Bill of Rights is not actually understood as inalienable — freedom of speech cannot be invoked, for instance, to justify threatening others or spreading false and potentially dangerous information. Nevertheless, its language is always an opportunity for American lawyers to resurrect literalist arguments, most problematically by challenging some precedents as a violation of the amendments’ wordings, or of the intent of their authors, despite the wisdom of the precedent. In a sense, and arguably to a greater extent than in other paradigms like the CCRF, American jurisprudence is literally trapped in semantics. This has given birth to two primary conservative legal philosophies: originalism, which is based on the original intent of the lawmakers, and textualism, which adopts a literal interpretation of the wording of the text itself.

Clearly, Canada has a Bill of Rights, which contradicts Federalist political philosophy. But it may be less “dangerous” in the Federalist view: Canadians have less reason to worship their charter with the unconditional reverence that characterizes the American approach to the Bill of Rights, considering that legislation must fall within “reasonable limits.” In theory, this caveat compels voters to more ardently scrutinize their elected representatives and courts, who are responsible for establishing those limits. The Canadian document is not as easily misunderstood as an impenetrable barrier to government overreach, and is perhaps more effective in some ways at promoting the kind of “civic virtue” upon which the US Constitution is predicated.

It is hardly reasonable to suggest repealing the Bill of Rights — that would be politically impossible. Still, perhaps Americans should treat the Bill of Rights (and the Constitution as a whole) with less reverence. It is imperfect, just as its Framers were (extremely) imperfect, and the political philosophy underlying it is neither understood by, nor wholly compatible with, the present. Although it provides a moral foundation for American society, its legal ramifications, taken too far, have often produced disastrous results. The Second Amendment is just one beleaguering example. COVID-19, it seems, is another.